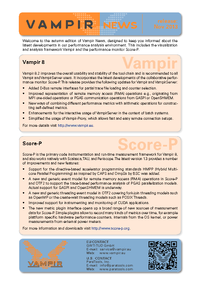 Welcome to the autumn edition of Vampir News, designed to keep you informed about the latest developments in our performance analysis environment. This includes the visualization and analysis framework Vampir and the performance monitor Score-P.

Score-P is the primary code instrumentation and run-time measurement framework for Vampir 8, and also works natively with Scalasca, TAU, and Periscope. The latest version 1.3 provides a number of improvements and new features: