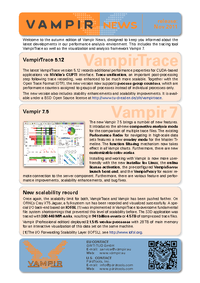 Welcome to the autumn edition of Vampir News, designed to keep you informed about the latest developments in our performance analysis environment. This includes the tracing tool VampirTrace as well as the visualization and analysis framework Vampir 7.

The latest VampirTrace version 5.12 records additional performance properties for CUDA-based applications via NVidia’s CUPTI interface. Trace unification, an important post-processing step following trace recording, was enhanced to be much more scalable. Together with the Open Trace Format (OTF), the new version now supports process group counters, which are performance counters assigned to groups of processes instead of individual processes only. The new version also includes stability enhancements and scalabiltiy improvements. It is available under a BSD Open Source license at www.tu-dresden.de/zih/vampirtrace. New scalability record Once again, the scalabilty limit for both, VampirTrace and Vampir has been pushed farther. On ORNL‘s Cray XT5 Jaguar, a full-system run has been recorded and visualized successfully. A special I/O back-end based on IOFSL [1] was implemented in VampirTrace to overcome fundamental file system shortcomings that prevented this level of scalability before. The S3D application was traced with 200,448 MPI ranks, resulting in 941 billion events or 4.5 TB of compressed trace files. Vampir (Professional edition) deployed 21,515 worker processes with 28 TB of main memory for an interactive visualization of this data set on the same machine.

The new Vampir 7.5 brings a number of new features. It introduces the all-new comparative analysis mode for the comparison of multiple trace files. The existing Performance Radar for navigating in high-scale data sets features a new overlay mode for the Master Timeline. The function filtering mechanism now takes effect in all Vampir charts. Furthermore, there are new customizable color scales. Installing and working with Vampir is now more userfriendly with the new installer for Linux, the online license activation, the pre-configured VampirServer launch front-end, and the VampirProxy for easier remote connection to the server component. Furthermore, there are various feature and performance improvements, scalability enhancements, and bug fixes.