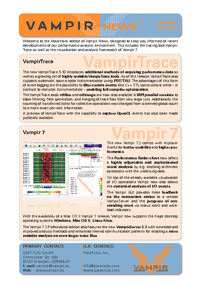 Welcome to the November edition of Vampir News, designed to keep you informed of recent developments of our performance analysis environment. This includes the tracing tool Vampir- Trace as well as the visualization and analysis framework of Vampir 7.

The new VampirTrace 5.10 introduces additional methods of acquiring performance data as well as a growing set of highly scalable VampirTrace tools. As of this release, VampirTrace also supports automatic source code instrumentation using PDT/TAU. The advantages of this form of event logging are the possibility to filter certain events (like C++ STL constructors) while – in contrast to compiler instrumentation – enabling full compiler optimization. The VampirTrace tools vtfilter and otfmerge are now also available in MPI parallel versions to allow filtering, filter generation, and merging of trace files from very large runs. Additionally, the counting of transferred bytes for collective operations was changed from a derived global count to a more exact per-rank information. A preview of VampirTrace with the capability to capture OpenCL events has also been made publically available.