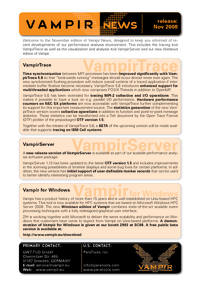 Welcome to the November edition of Vampir News, designed to keep you informed of recent developments of our performance analysis environment. This includes the tracing tool VampirTrace as well as the visualization and analysis tool VampirServer and our new Windows edition of Vampir.

Time synchronization between MPI processes has been improved significantly with VampirTrace 5.6 so that "backwards running" messages should occur almost never ever again. The new synchronized flushing procedure will reduce overall runtime of a traced application if intermediate buffer flushes become necessary. VampirTrace 5.6 introduces enhanced support for multithreaded applications which now comprises POSIX Threads in addition to OpenMP. VampirTrace 5.6 has been extended for tracing MPI-2 collective and I/O operations. This makes it possible to have a look on e.g. parallel I/O performance. Hardware performance counters on NEC SX platforms are now accessible with VampirTrace further complementing its support for this important measurement source. The statistics generation of the new VampirTrace version covers collective operations in addition to function and point-to-point message statistics. Those statistics can be transformed into a TeX document by the Open Trace Format (OTF) profiler of the prepackaged OTF version 1.5. Together with the release of VampirTrace 5.6, a BETA of the upcoming version will be made available that supports tracing on IBM Cell systems.

A new release version of VampirServer is available as part of our scalable performance analysis software package. VampirServer 1.10 has been updated to the latest OTF version 1.5 and includes improvements in the zooming possibilities of timeline displays and some bug fixes for certain platforms. In addition, the new version has initial support of user-definable marker records that can be used to better identify interesting program areas.

Vampir has a product history of more than 15 years and is well established on Unix-based HPC systems. This tool is now available for HPC systems that are based on Microsoft Windows HPC Server 2008. The new Windows edition of Vampir combines state-of-the-art scalable event processing techniques with a fully redesigned graphical user interface. ZIH is working together with Microsoft to deliver the same scalability and performance on Windows that customers have come to expect from Vampir on Unix-based platforms. A demonstration of Vampir for Windows is given at our booth 2903 at SC08.