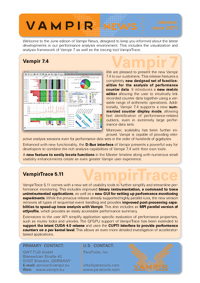 Welcome to the June edition of Vampir News, designed to keep you informed about the latest developments in our performance analysis environment. This includes the visualization and analysis framework of Vampir 7 as well as the tracing tool VampirTrace.

We are pleased to present the new Vampir 7.4 to our customers. This release features a completely new designed set of functionalities for the analysis of performance counter data. It introduces a new metric editor allowing the user to intuitively link recorded counter data together using a versatile range of arithmetic operations. Additionally, Vampir 7.4 supports a new summarized counter display mode, allowing fast identification of performance-related outliers, even in extremely large performance data sets. Moreover, scalability has been further improved. Vampir is capable of providing interactive analysis sessions even for performance data sets in the order of hundreds of gigabytes. Enhanced with new functionality, the D-Bus interface of Vampir presents a powerful way for developers to combine the rich analysis capabilities of Vampir 7.4 with their own tools. A new feature to easily locate functions in the Master timeline along with numerous small usability enhancements create an even greater Vampir user experience.

VampirTrace 5.11 comes with a new set of usability tools to further simplify and streamline performance monitoring. This includes improved binary instrumentation, a command to trace uninstrumented applications, as well as a new GUI for setting up performance monitoring experiments. While the previous release already supported highly parallel runs, the new version removes all types of sequential event handling and provides improved post-processing capabilities to speed-up trace analysis with Vampir. This also includes an MPI parallel version of otfprofile, which provides an easily accessible performance summary. Extensions to the user API simplify application specific evaluation of performance properties, such as mutex locks and unlocks. The GPGPU support of VampirTrace has been extended to support the latest CUDA 4.0 release and uses the CUPTI interface to provide performance counters on a per kernel level. This allows an even more detailed investigation of acceleratorbased applications.