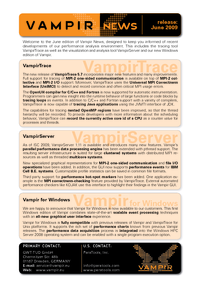 Welcome to the June edition of Vampir News, designed to keep you informed of recent developments of our performance analysis environment. This includes the tracing tool VampirTrace as well as the visualization and analysis tool VampirServer and our new Windows edition of Vampir.

The new release of VampirTrace 5.7 incorporates major new features and many improvements. Full support for tracing of MPI-2 one-sided communication is available on top of MPI-2 collective and MPI-2 I/O support. Moreover, VampirTrace uses the Universal MPI Correctness Interface (UniMCI) to detect and record common and often critical MPI usage errors. The OpenUH compiler for C/C++ and Fortran is now supported for automatic instrumentation. Programmers can gain new insight into the runtime behavior of large functions or code blocks by tracing loops as events. In addition to C/C++ and Fortran support with a variety of compilers, VampirTrace is now capable of tracing Java applications using the JVMTI interface of JDK. The capabilities for tracing nested OpenMP regions have been improved, so that the thread hierarchy will be recorded. To provide developers with more information about the scheduling behavior, VampirTrace can record the currently active core id of a CPU as a counter value for processes and threads.

As of ISC 2009, VampirServer 1.11 is available and introduces many new features. Vampir’s parallel performance data processing engine has been extended with pthread support. The resulting server infrastructure is suited for large clustered systems with distributed MPI resources as well as threaded multicore systems. New specialized graphical representations for MPI-2 one-sided communication and file I/O operations have been added. In addition, the GUI now supports performance events for IBM Cell B.E. systems. Customizable profile statistics can be saved in common file formats. Third party support for performance hot-spot markers has been added. One application example is the MPI correctness-checking feature provided by VampirTrace. External automated performance checkers like KOJAK use this interface to highlight their findings in the Vampir GUI.

We are happy to announce that Vampir for Windows is now available to our customers. This first Windows edition of Vampir combines state-of-the-art scalable event processing techniques with an all-new graphical user interface experience. Vampir for Windows is fully compatible with previous releases of Vampir and VampirTrace for Unix platforms. It supports the rich set of performance charts known from previous Vampir releases. The performance data acquisition process is integrated into the Windows HPC Server 2008 operating system and can be enabled with a single program execution option.