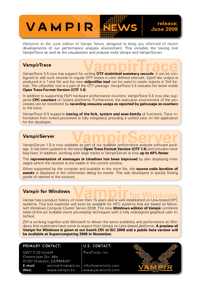 Welcome to the June edition of Vampir News, designed to keep you informed of recent developments of our performance analysis environment. This includes the tracing tool VampirTrace as well as the visualization and analysis tools Vampir and VampirServer.

VampirTrace 5.5 now has support for writing OTF statistical summary records. It can be configured to add such records to regular OTF traces in user defined intervals. Gprof like output is produced in a *.stat file and the new otfprofiler tool can be used to create reports in TeX format. The otfprofiler tool is a part of the OTF package. VampirTrace 5.5 includes the latest stable Open Trace Format Version (OTF 1.4). In addition to supporting PAPI hardware performance counters, VampirTrace 5.5 now also supports CPC counters on Solaris platforms. Furthermore, the execution environment of the processes can be monitored by recording resource usage as reported by getrusage as counters to the trace. VampirTrace 5.5 supports tracing of the fork, system and exec-family of functions. Trace information from forked processes is fully integrated, providing a unified view on the application for the developer.

VampirServer 1.9 is now available as part of our scalable performance analysis software package. It has been updated to the latest Open Trace Format Version (OTF 1.4) and includes minor bug fixes. In addition, working with large traces in VampirServer is now up to 40% faster. The representation of messages in timelines has been improved by also displaying messages where the receiver is not visible in the current window. When supported by the compiler and available in the trace file, the source code location of events is displayed in the information dialog for events. This aids developers in quickly finding points of interest in the sources.

Vampir has a product history of more than 15 years and is well established on Unix-based HPC systems. This tool expertise will soon be available for HPC systems that are based on Microsoft Windows Compute Cluster Server 2008. The new Windows edition of Vampir combines state-of-the-art scalable event processing techniques with a fully redesigned graphical user interface. ZIH is working together with Microsoft to deliver the same scalability and performance on Windows that customers have come to expect from Vampir on Unix-based platforms. A preview of Vampir for Windows is given at our booth C51 at ISC 2008 and a public beta version will be available at Supercomputing 2008 in November.