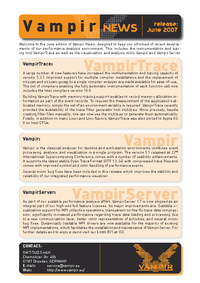 Welcome to the June edition of Vampir News, designed to keep you informed of recent developments of our performance analysis environment. This includes the instrumentation and tracing tool VampirTrace as well as the visualization and analysis tools Vampir and VampirServer.

A large number of new features have increased the instrumentation and tracing capacity of version 5.3.1. Improved support for multiple compiler installations and the replacement of vtinst and vtinst-pomp by a single compiler wrapper are made available for ease-of-use. The list of compilers enabling the fully automatic instrumentation of each function call now includes the Intel compilers version 10.0. Building VampirTrace with memory-tracing support enables to record memory allocation information as part of the event records. To request the measurement of the application’s allocated memory, simply the set of an environment variable is required. VampirTrace recently provided the availability of the trace filter generator tool vtfilter. More precisely, beside creating filter files manually, one can now use the vtfilter to generate them automatically. Finally, in addition to many Linux and Unix flavors, VampirTrace was also ported to Apple OS X on Intel CPUs.

Vampir is the classical analyzer for desktop and workstation environments combines event processing, analysis, and visualization in a single program. The version 5.1 released at 22nd International Supercomputing Conference comes with a number of usability enhancements. It supports the latest stable Open Trace Format (OTF 1.2.24) with compressed trace files and comes with improved symbol and color handling of performance events. Several minor bug fixes have been included in this release which improves the stability and reliability of our integrated performance visualizer.

As part of our scalable performance analysis effort, VampirServer 1.7 is now shipped as an integral part of our high-end full feature licenses. Its major improvements are: Scalable visualization support for MPI collective operations, transparent on-the-fly trace data compression, significantly increased performance regarding trace data loading and processing due to a new communication layer, better color representation of activities, and several minor bug fixes. Dynamically loadable MPI drivers are now available for the majority of existing MPI implementations, which facilitates the installation and maintenance of VampirServer. For further details and to enjoy a demo visit our booth B11 at ISC.